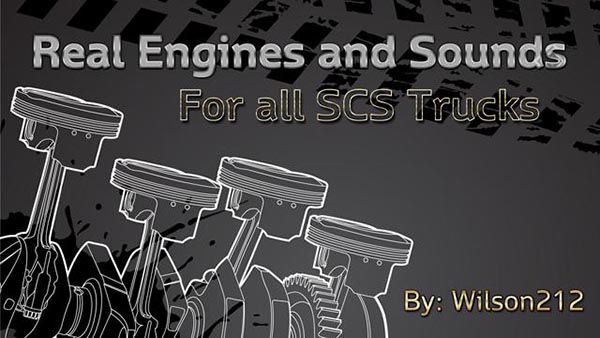 This mod adds new engines to each of the SCS trucks in game (579, t680, and the w900).
These engines are replicated from real life engines, and contain real horsepower and torque
ratings. A lot of research went into these engines to ensure that the numbers behind each
engine are correct. All the included engines use Kriechbaums engine sounds, for added
realism.

How Does This Mod Differ From The Rest?

Sensible Engines: Most engine mods just add new engines of various horsepowers to the game.
While, they may be realistic engines, many people fail to realize that Horsepower does not matter
in this game. Torque is the only performance variable for an engine in ATS/ETS2. There are
only 5 common torque options for heavy duty trucks in real life (1450, 1550, 1650, 1850 and 2050).
Whats the point of having 30 Mx-13 engines for each truck when only 5 of them will perform
differently from each other? This mod adds the most popular engines, and removes redundant
motors that are indifferent from another.

Realistic Sounds: Kriechbaum has allowed me to use his custom (and very realistic) engine
sounds for my engines. Most engine mods are just that, a mod to add new engines using the
default sounds in game. This mod however, uses realistic engine sounds for added
immersion and realism.

Attention to Detail: Alot of time, effort, and research went into getting the correct
data attached to each engine. Things like Torque values, horsepower, peak RPM’s, engine
displacement, Governed RPM limits… you name it, I researched it. Every engine’s def file
includes links to where exactly I got my information on that engine, to ensure quality.

I decided to keep progression unlocks in this mod. A new player (under level 4) will only have
engines with 1450 torque available to them. Engines with 1550-1650 torque will unlock at player
level 4. At level 8, engines with 1850 will be unlocked. At level 12, all engines will be
unlocked.

Below is a list of all engines I have added in my mod. Each engine brand below has their own
unique sounds:

Differences Between the Engines

There is not a huge difference between each engine, as customization is somewhat limited. The
ISX12 and MX-13 engines will have the best gas mileage (if using Realistic Fuel Consumption) and
lower power ratings, wheras the ISX15 and C15 motors will have the best power ratings and worst
mileage. Engine size is a real thing in this game, so larger engines will get worse gas mileage.
Aside from Gas mileage and Torque values however, the only other difference is the sound of each
engine. Every engine type (Mx-13, ISX, N14, C15, 3406e) all sound different, and as close to
their real counterparts as possible.

This mod is compatible with all other mods that do not adjust common vehicle sounds (such as brakes, wipers, blinkers etc etc). There is an exception to the following mods:

If you ever feel the need to remove this mod, just swap the engine in your truck to one of the
SCS default engines, and hit the “Unsubscribe” button on this mod page.

Do company (none owned) trucks use your new sounds?
No. This is because of FAQ number 1. You must install one of my new engines, in your own truck to enjoy the new sounds.

I subscribed to the mod, but there are no new engines at the garage!
You need to be running Public Beta 1.2 to have access to Workshop mods in game. To download Beta, right click American Truck Simulator in your Steam library, and choose “Properties”. Click the “Betas” tab on the top of that new screen, and in the drop down menu… choose Public Beta 1.2. Wait for the update to finish and from there, hitting the “Subscribe” button above will download and install the mod for you.

Can I add my own engines using the new sounds?
Yes you can! I have made this extremely simple to do with my ATS Engine desktop application (written by myself). Look for the app in the “Discussions” tab at the top of this page.